In Psalm 23, David has revealed many of the promises that sheep enjoy, as a result of having the Lord as their Shepherd. Sheep are promised a competent leader who looks out for all of their needs. Sheep also benefit from the promise that their Shepherd will never abandon them, even as they travel through the "valleys" of life. Shepherds often use the "Long Drives" to the highlands , although very dangerous,  as an opportunity to bond even closer with their sheep. David now unpacks yet another role of the Shepherd, that of using the "Tools of His Trade", the "Rod" & the "Staff", to care for His sheep.

"Our chief wisdom consists in knowing our follies and faults, so that we may correct them."
author unknown


"An error doesn't become a mistake until you refuse to correct it."
Orlando A. Battista

"Your rod & Your staff, they comfort me."
Psalm 23:4b
From his childhood days, a Middle Eastern shepherd's standard "Tools of the Trade" are a Rod & a Staff! I'd like to examine the Rod first, for it has some unique uses. First of all, the Rod was a hand-crafted club that was used as a weapon to protect both the Shepherd & the flock. The Rod was thrown with great accuracy at any predators that attempted to harm the flock. The Rod was also used by the Shepherd as a tool to both examine & count the sheep as they entered the pen. A loving Shepherd personally examines each sheep's wool & body as it "passes under the Rod". (Ezekiel 37) The final use of the Rod is that of a tool of correction. The Shepherd often used the Rod to hurl at a wayward sheep. This form of discipline, meted out by the Shepherd, usually  convinces the "run-away" to return to the flock.
﻿

"When the devil knocks at the door of my heart, I take Jesus by the hand. I ask Him to go with me to answer the door. When I open the door, the devil sees me and Jesus standing hand in hand and he says, "Excuse me, I must be at the wrong place." He leaves."
Herbert C. Gabhart

"When we stray from His presence, He longs for you to come back. He weeps that you are missing out on His love, protection and provision. He throws His arms open, runs toward you, gathers you up, and welcomes you home."
Charles Stanley

"The closer we walk to the Shepherd, the farther we are from the wolf. "
Anonymous 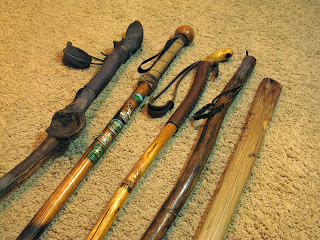 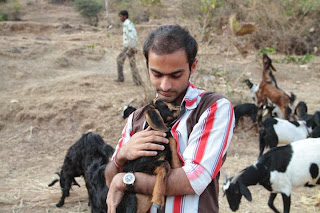 Let me  take a closer look at Ewe!

"Our "safe place" is not where we live, it is in whom we live." Tom White - Voice of the Martyrs

"I am going out on Thy path. God be behind me, God be before, God be in my footsteps."
Anonymous Gaelic prayer 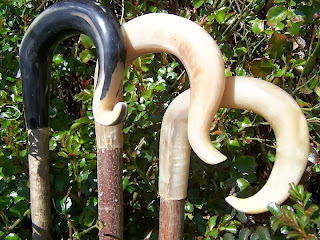 When in danger, Ewe can get easily "Hooked" on the Staff ! 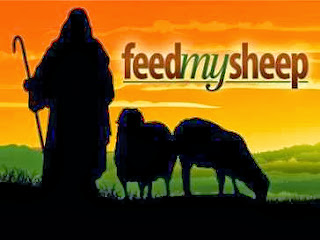 The Shepherd loves & cares for the sheep!
Shepherds have unique "Tools of the Trade", the Rod & Staff, at
their disposal, which are used to benefit the lives of their sheep.
﻿
﻿
﻿
﻿ 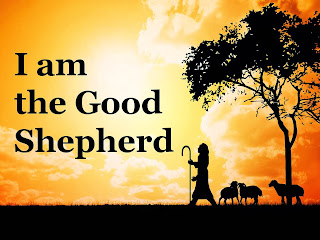 I will lead Ewe to a better life! 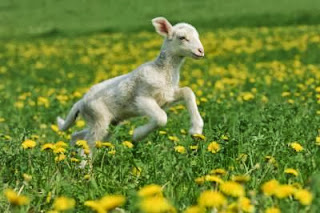 Life in the care of the Shepherd is GOOD!
﻿
﻿
As Ewe walk through Ewer day, walk assured, that Ewer Shepherd walks with EWE!
﻿
﻿
"The Greatest among you will be your servant." Matthew 23:11
﻿
Posted by The Sheep Whisperer at 10:06 PM 5 comments:


In Psalm 23, David has revealed many benefits that sheep possess, as a result of having the Lord as their Shepherd. Sheep will have a competent leader, guide, manager, & nutritionist, to look out for all of their needs. Sheep also benefit from the contentment that results from an intimate relationship with the Shepherd. Sheep also need to be "on the move", in order to preserve the life of both the sheep & the land. David now unpacks further insights in the Psalm. He specifically reveals the care that the Shepherd provides, as He leads His sheep through the "Valleys" of life.

"GOD has made for man a path to walk in.   In His will there is order and purpose"  - Anonymous
﻿﻿
A little girl repeating the Twenty-Third Psalm said it this way: "The LORD is my Shepherd,  that's all I want"Henry Ward Beecher
﻿﻿﻿﻿
"Yea, though I walk through the valley of the
shadow of death.." Psalm 23:4a

In many western ranches & in Palestine, most knowledgeable Shepherds ensue the common practice of moving their flocks to higher ground for the summer & fall months. This requires a fair amount of planning, since sheep need to be led through many dangerous valleys in order to reach the higher elevations! For example, there are dangerous storms to weather, dangerous plants, rock slides, & rivers to avoid, & finally, there's always the distinct possibility of ravenous predators! The Shepherd is keenly aware of these dangers & skillfully guides his flock upwards, knowing that higher ground is "just what the doctor ordered" for his sheep in the summer & fall.
﻿
"We must constantly build dykes of courage to hold back the flood of fear."     Author: Martin Luther King Jr.
"For I am the Lord, your God, who takes hold of your right hand and says to you, Do not fear; I will help you." (Isaiah 41:13)﻿﻿
﻿
" I will fear no evil; for You are with me;.." Psalm 23:4b
David knew first-hand the obstacles associated with a long "sheep drive" to higher ground. He was aware of what the sheep would be facing on their trek. However, he also knew, that the LORD was HIS Shepherd, & was also intimately acquainted with his life. Just as David was skillfully anticipating solutions for the challenges before him, so His Shepherd was doing so for him. That's why he could confidently state, "I will fear no evil"! Did the dangers of wild weather, raging rivers, stalking predators, or sudden rock slides diminish? Or did David's bold declaration of His Shepherd's presence change his outlook? It reminds me of an old saying; " If Ewe have a BIG GOD, Ewe have 'small problems', & if Ewe have a 'small God', Ewe have 'BIG PROBLEMS'!"

"Courage is contagious. When a brave man takes a stand, the spines of others are often stiffened. " Author: Billy Graham
" What then shall we say to these things? If God is for us, who can be against us? " Romans 8:31

Shepherds deepen their relationships with their sheep on their long "drives" to the higher elevations in the summer & fall of the year. Although an extremely dangerous trek, it proves to be a truly fruitful & worthwhile journey!
﻿﻿
﻿
Even though the way may seem difficult at times, follow the Shepherd! Ewe won't be disappointed in His final destination for EWE!

King David has unpacked some outstanding promises for sheep(people) in the 23rd Psalm. He already has established that sheep have a competent leader in the Lord as their Shepherd. David also confidently states that sheep will have all their needs met by their caring Shepherd! Next, David suggests that following the
Shepherd will lead to even further blessings for the sheep.

"Ho, every one that thirsteth, come ye to the waters, and he that hath no money; come ye, buy, and eat; yea, come, buy wine and milk without money and without price." Isaiah 55:1
﻿

David continues the Psalm by stating another key responsibility of the Shepherd, the role of restoring the sheep.﻿﻿Sheep can easily find themselves in life & death situations, particularly if they are "cast down". A "cast down" sheep is an old English shepherd's term for a sheep that has literally been turned over on its back & unable to get up. "Cast" sheep are absolutely helpless,﻿﻿ & will eventually die, unless the Shepherd arrives﻿﻿﻿﻿ in a timely fashion. Shepherds must be on the alert for missing sheep, their vulnerability to predators, & their critical need for rapid restoration.

"By a Carpenter mankind was made, and only by that Carpenter can mankind be remade."
Author  Desiderius  Erasmus


"Brethren, if a man be overtaken in a fault, ye which are spiritual, restore such an one in the spirit of meekness; considering thyself, lest thou also be tempted." Galatians 6:1


"He leads me in the paths of righteousness For His name's sake." Psalm 23:3b

David now confirms in the Psalm, that sheep need to be led into the "right" paths by the wise Shepherd. Characteristically, sheep are "creatures of habit", finding themselves walking on the same paths, & grazing in the same pastures until they are moved. As a result of their "bad" habits, ruts & gullies are formed, & pastures are turned into literal wastelands. Thankfully, the wise Shepherd is intimately acquainted with the sheep, & knows that managing the land & the sheep properly, will involve keeping the sheep "on the move"! Healthy sheep must be led into new paths & new pasture lands, thus preserving the health of both the sheep & the land. This is the scene that David, as a Shepherd, is personally acquainted with, & is vividly painting for us in the 23rd Psalm.

"True leadership must be for the benefit of the followers, not to enrich the leader."
--John C. Maxwell


Sheep are in need of more management & guidance than any other domesticated livestock. The Good Shepherd is aware of their needs & keenly leads them accordingly!

﻿
As Ewe graze on the paths that Ewer Shepherd leads Ewe into today, rejoice that He is leading Ewe into lush pastures that will truly satisfy Ewer appetite!

Posted by The Sheep Whisperer at 7:09 AM 4 comments: