The Christian Life was intended to be a fruitful life. As we grow in our intimacy with Christ, the "Fruit of the Spirit" in our lives will become more  evident others around us. Today I'm going to focus on the final fruit on the list, the fruit of Self Control! I'll  illustrate this fruit through the world of nature & animals. I hope Ewe have enjoyed our "glimpses" of the "Fruit of the Spirit". Famous author  & American statesman Daniel Webster wrote," Educate your children to self-control, to the habit of holding passion and prejudice and evil tendencies to an upright and reasoning will, and you have done much to abolish misery from their future lives and crimes to society."
﻿
Chinese Christian author & church leader Watchman Nee wrote, "If we know that the aim of the Holy Spirit is to lead man to the place of self-control, we shall not fall into passivity but shall make good progress in spiritual life. 'The fruit of the Spirit is self-control."
Christian theologian & author R. C. Sproul once wrote, "Anger is not in itself sinful, but...it may be the occasion for sin. The issue of self-control is the question of how we deal with anger. Violence, tantrums, bitterness, resentment, hostility, and even withdrawn silence are all sinful responses to anger."
Christian pastor & author Max Lucado  once wrote, " I am a spiritual being... After this body is dead, my spirit will soar. I refuse to let what will rot rule the eternal. I choose self-control. I will be drunk only by joy. I will be impassioned only by my faith. I will be influenced only by God. I will be taught only by Christ."


Evangelical Christian author & speaker Jerry Bridges wrote,"
﻿﻿Self-control is the exercise of inner strength under the direction of sound judgment that enables us to do, think, and say the things that are pleasing to God."
Sheep learn Self Control through the proper management of their Shepherd. Rams, however, have to learn it the "Hard Way", in the "School of Hard Knocks"!
Today,thank the Shepherd often for the way He manages Ewer life. Praise Him that Self Control is a fruit that He will grow in His sheep!

Posted by The Sheep Whisperer at 1:32 PM 2 comments:


As I have previously noted, the Christian life is intended to be a Fruitful life. As we grow in our intimacy with Christ, & learn to
"Walk in His Spirit", the fruit of the Spirit will flourish  in our lives. Today I'm going to focus on the fruit of Gentleness & illustrate this fruit through the world of nature & animals. Christian evangelical author Jerry Bridges wrote, "Both gentleness and meekness are born of power, not weakness. There is a pseudo-gentleness that is effeminate, and there is a pseudo-meekness that is cowardly. But a Christian is to be gentle and meek because those are Godlike virtues... We should never be afraid, therefore, that the gentleness of the Spirit means weakness of character. It takes strength, God's strength, to be truly gentle." ﻿﻿
Quaker & political thinker Edmond Burke once stated, "The weapons with which the ill dispositions of the world are to be combated are moderation, gentleness, a little indulgence of others, and a great distrust of ourselves."
﻿
Christian author & preacher Francis LaSalle wrote, "Nothing is so strong as gentleness, nothing so gentle as real strength."
﻿﻿﻿﻿
Distinguished Christian pastor & author Max Lucado wrote, " I choose gentleness... Nothing is won by force. I choose to be gentle. If I raise my voice may it be only in praise. If I clench my fist, may it be only in prayer. If I make a demand, may it be only of myself." ﻿﻿﻿﻿﻿﻿
British Christian evangelical leader & author John Stott wrote,
﻿
﻿
"The very first thing which needs to be said about Christian ministers of all kinds is that they are "under" people as their servants rather than "over" them (as their leaders, let alone their lords). Jesus made this absolutely plain. The chief characteristic of Christian leaders, he insisted, is humility not authority, and gentleness, not power."
Sheep are fortunate to have a Gentle Shepherd to lead, guide, & provide for them on a daily basis. The Gentleness of the Shepherd actually calms their nerves & draws them near to him
﻿﻿﻿﻿﻿﻿﻿﻿

﻿
﻿
﻿
As Ewe face whatever Ewer day has for Ewe today, recall the Gentleness of Ewer Good Shepherd, & look to Him to guide Ewe into all kinds of new adventures.

"Take my yoke upon you, and learn from me, for I am gentle and lowly in heart, and you will find rest for your souls." Matthew 11:29﻿﻿
Posted by The Sheep Whisperer at 5:36 AM No comments:

﻿As Ewer Dad, I must train Ewe in the ways of a WOLF!
The Seahorse is my next candidate for a "Top Ten" Dad of the animal world. Male Seahorses are distinctively among the only species on Earth in which the male carries the unborn young They are endowed with a brood pouch into which the female deposits her eggs when mating. He then fertilizes the eggs internally & houses them in his pouch until they hatch. When Dad's job is done, he releases the miniature, fully-developed Seahorses into the water. How many Dads that Ewe know go through labor & delivery as a patient?﻿
﻿
﻿﻿ 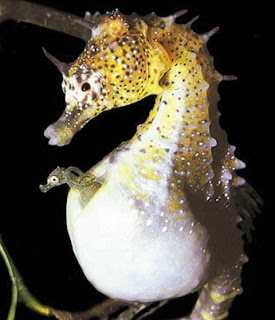 ﻿
﻿
I really can "Stomach" this part of Fatherhood! ﻿
﻿
Owl Monkeys, the only nocturnal "New World" monkeys, are my next choice for my "Top Ten" list of animal Dads. These Dads take charge of most of the childcare in the family after the babies are born. Mothers feed the babies, but that's where it ends. The rest is up to dear old Dad! Once children are weaned, Dads take over feeding the little munchkins. Dads are also the official babysitters, playing with, chasing, & wrestling with the youngsters. Dads also carry the children on their backs for protection from predators! Most Owl Monkey Dads also stay with their mates for life, which makes them a real, lasting "Catch"! 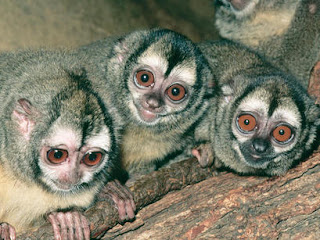 Even though we're monkeys, we are still "NIGHT OWLS"!﻿ 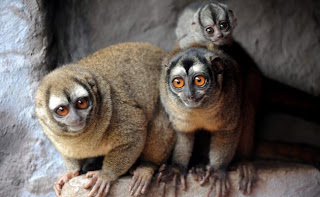 Dad carries childcare, literally, on his back!﻿

Male Lumpsuckers are my final pick for my "Top Ten" list of animal Dads. Lumpsuckers are located mostly around the British & Irish coasts.They are very protective of their young, having the responsibility of supervising over 300,000 eggs for a period of six to seven weeks!Can Ewe imagine being on "Guard Duty" for that long? Now that's a commendable Dad! Lumpsuckers also make colorful mates, literally changing colors to blue, red, or orange, during the breeding season! Males are also a highly sought after delicacy in Nordic countries as caviar! YUCK!
Sheep have attentive Shepherds to take the "Protective" role of the fathers. They also ﻿﻿﻿﻿provide food & shelter for their needy flocks!

Responsible Dads are so vital to the operation of a functional family! Today, thank our Heavenly Father often for His provision & care, both of Ewe, & Ewer family!

My next choice of a "Top Ten" Dad in the animal world is the Marmoset Monkey of South America. Marmoset Dads are the leaders of their very "social" troops, & take an extremely active role in child rearing. As a matter of fact, they act as midwives during the birthing event & even bite off the umbilical chord, clean up the afterbirth, & wash up the babies .YUCK! Dads continue caring for the babies by carrying the babies on their backs & returning them every 2 or 3 hours for breast feeding. Dads also secure the help of others in the troop, to assist the Moms in raising their babies. Wow!

﻿
﻿
Adult male Silverback Gorillas are my next pick for my "Top Ten" animal Dads. Silverback Gorillas are the dominant males that lead their troops, which are comprised of up to 30 individuals. As the Dad, or leader of the troop, they engage in many responsibilities. As the male leader, Silverback Gorillas locate food, arrange for a nesting area, settle disputes within the clan, & protect the troop from any outside threats. Besides all that, these Dads also discipline the kids & even have time to play affectionately with them! WOW!﻿﻿

Rheas are my next candidates for my "Top Ten" list of animal Dads! Rheas are ostrich-like, flightless birds from South America, that gather in groups of 30, & are considered the largest birds in the "New World"! The Rhea Dad starts his quest for fatherhood by bellowing a loud call, to notify the females, that he's ready to fight other males for the right to mate. After he emerges victorious, he will mate with 2 or more females. The females will lay about a dozen "golden" eggs apiece in a shallow nest in the ground. The male then takes over by incubating the eggs & caring for the young, which may be as many as 50 eggs at a time!For this display of sheer dedication, Rhea Dads are one of the best! By the way, The word on the street is that Rheas make better fathers than husbands.
﻿﻿﻿
Sheep do not have "Involved" Dads. Rams just mate & abandon the family. Unfortunately, Sheep Moms are left with the brunt of the responsibility, & have to fill in the gap with the assistance of the Shepherd.﻿﻿﻿﻿﻿﻿﻿
﻿
As we continue to honor Dads & their importance to the family, let's give honor to our Heavenly Father for the wonderful care He gives to us each day!


"For the Father himself loves you, because you have loved Me, & have believed that I came forth from God." John 16:27
Posted by The Sheep Whisperer at 5:56 AM No comments: