The eastern Timber Wolf is an amazing creature that inhabits North America. It is ordinarily shy, however becomes very dangerous when it joins a pack! Wolves in a pack are relentless in their pursuit of prey.They patiently wait for the opportune moment to strike as a cooperative team! Together they are able to take down a moose, twelve times their own weight, having antlers & hooves that could prove to be lethal!
﻿﻿﻿
Wolves travel in a pack that is led by a dominant alpha male & female.They strengthen the pack & breed, producing a litter 0f 4-14 pups.The pups are born in a den dug six to thirty feet long underground.Wolves are loyal & affectionate parents, & both  share in the responsibilities of caring for the pups.Wolves are loyal to their mates & will mate for life!The term "Lone Wolf" is a term given to a wolf that loses its mate & generally doesn't mate again. . ﻿﻿﻿
﻿﻿﻿﻿﻿﻿﻿﻿﻿﻿﻿﻿﻿

Sheep do herd together for safety,however,they rely more on the Shepherd for food & drink.Those sheep that do try to explore solo, usually find themselves in trouble! They can easily be "cast down", with all four legs in the air! Left in this condition, a sheep will die without help![a pick-me-up]﻿﻿
﻿﻿

Sheep enjoy being cared for by the Shepherd.Of all domesticated animals, sheep need the most guidance & direction.A faithful Shepherd understands this & remains loyally by their side! Like the wolf, he's committed to the relationship for the long haul! 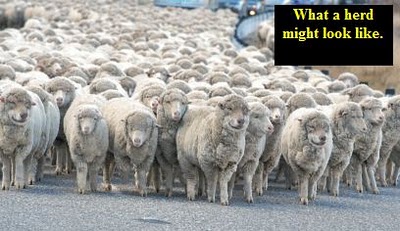 
The Good Shepherd cares for Ewe perfectly! His committment  to Ewe can't be shaken! Trust Him to care for Ewe today!